A few things offered at the Princess Sodalite Mine Rock Shop

A Bit of History

As you make your way down the path towards the rock farm, you are walking past a rock face on your right that was a part of one of Bancroft’s most interesting mining operations – the quarrying of the deep blue mineral called sodalite.

During her visit to the 1901 World’s Fair in Buffalo , New York , the Princess of Wales was so captivated by a gift of Bancroft sodalite that arrangements were made to quarry enough to decorate her London residence, Marlborough House. In 1906, these hillsides were worked by the owners of the property for this mineral and shortly after, 130 tonnes of the rock were shipped to England to be used as a decorative stone in the Princess’ royal home. And that is from where the name “Princess Sodalite Mine” comes.

Today, sodalite is commonly used in the creation of jewelry and as an ornamental stone. It is also the mineral most people associate with the uniqueness of the Bancroft region’s mineral heritage.

The pieces of sodalite you will find in the rock farm vary in the intensity of blue. Look for pieces that are a deep blue colour. Surrounding the mineral you will usually find a grayish-white mineral called nepheline. Nepheline syenite gneiss (pronounced “nice”) is the main rock which surrounds you.

Since 1961, when the site was first opened to collectors, visitors have been made welcome. Andy Christie, the current owner, will do his best to make your visit a worthwhile experience. Good collecting!

When Andy Christie bought the property, a small “r 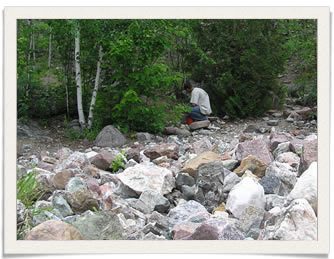 ock farm” was already in place. Andy felt there needed to be a place for young people to actually pick over a large number of rock and mineral pieces until they found the samples they wanted to take home with them and so the rock farm was expanded to its current size – a place where collectors both young and old could harvest a vast variety of specimens and do it at a price that was affordable. Andy keeps adding to the farm so each visit brings new opportunities to fine “keepers”, samples that you and your children have collected that can be kept for a life-time. What You Might Find at the Farm

The rock farm is always changing; new “crops” are added while others are being collected. But there are some rocks and minerals which you can find most of the time at the farm. Take your time when you’re collecting. Look, pick-up, look some more until you find a piece that you are happy to take home with you.

1. Everyone who wishes to enter must have approved safety glasses. Prescription glasses and/or sunglasses are not acceptable. They do have safety glasses for sale in the store at a minimal cost.

2. Footwear must be completely enclosed.  Absolutely nothing with any form of holes other than the one your foot goes in will be accepted.