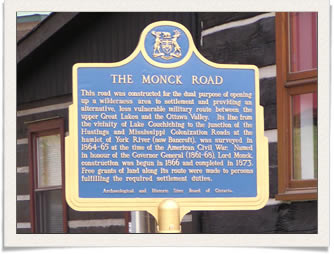 Monck Road (County Road 45, formerly Hwy 503), which runs through the Bancroft district, is one of the oldest provincial roads north of Toronto. It has a rich history. From Lake Couchiching Road it extends 150 kilometres east to Hastings Road. Monck Road’s original purpose was twofold; firstly, that of opening up a wilderness area to settlement; secondly, it was intended to serve as an alternate military route from the upper Great Lakes to the Ottawa Valley. At that time the only other route was the St. Lawrence River, which was vulnerable to American attack.

The route of Monck Road was surveyed in 1864 to ‘65. Construction under Chief Engineer Snow began in 1866, and the road was finished in 1873. Settlement was encouraged by giving free grants of land along the route, assuming the settlers fulfilled the conditions of settlement. The free land turned out not to be too good for farming, but the resourceful settlers found additional sustenance and income in hunting, fishing and trapping.

Monck Road would luckily never be required for military purposes. Yet at the time of its construction there were threats not to be taken lightly.

The United States’ 19th century doctrine of Manifest Destiny was the basis for the Americans’ belief that they were destined to expand across the continent and thus promote and defend democracy. This doctrine was used by the U.S. to justify the Mexican-American War (1846 – 1848), which resulted in Mexico having to cede vast parts of its country to the United States. This extraordinary land grab, which had little to do with spreading democracy, must have been a warning to British America (Canada).

Yet another, more immediate threat to Canada came from the Fenian Brotherhood, which was based in the United States. Its members were Irish-born veterans of the American Civil War (1861 – 1865). They decided to make war with British America (Canada) in order to bring pressure on Britain to withdraw from Ireland. They were a mix of fervent radicals and skilled soldiers, who had learned their trade during the American Civil War and then would not settle down to a civilian life. The radicals expressed their ideas in the Fenian Manifesto, namely, that upon victory “demand will be made upon the United States for a formal recognition of Canada, whose name will be changed at once to New Ireland.” A Fenian soldiers’ song reflected the mood of the rank and file:

We are the Fenian Brotherhood, skilled in the arts of war,

And we’re going to fight for Ireland, the country we adore,

Many battles we have won, along with the boys in blue,

And we’ll go and capture Canada, for we’ve nothing else to do.

During the so-called Fenian Raids on Canada (1866 to 1871), the Fenians attacked British army forts, customs posts and other targets. Yet they never got near the Bancroft area. Although there was a lack of coordination between the poorly trained Canadian troops and the British army, they managed to defeat the Fenians each time. U.S. authorities appeared to turn a blind eye to the Fenians’ preparations for their invasions. This caused anti-American sentiment to rise among the Canadians and promoted nationalistic feelings in Canada. However, the United States, supposedly a neutral country, had to act eventually against the Fenians. U.S. authorities arrested the men and confiscated their arms. Yet the Fenian Raids demonstrated to the hitherto separate colonies in British America (Canada) the necessity to have a united defence. This was an important reason for the Canadian Confederacy. Hence on July 1, 1867 three British colonies decided to unite in the Dominion of Canada, which consisted of four Canadian provinces – Ontario, Quebec, New Brunswick and Nova Scotia.

And so it is fitting that Monck Road, completed in 1873, was named in honour of Canada’s first Governor General (1867/68), Sir Charles Stanley Monck. Prior to becoming a capable Governor General, Lord Monck had been the British administrator of the then colonies in British America (1861 to 1867).

Although never needed by the military, the Monck Road then became an important factor in the economic development of the Bancroft district. Yet it never lost its special pioneer character, given to it by some colourful individuals that lived along it. They were good at hunting, fishing and trapping, but less good at obeying laws or paying taxes. Their names speak for themselves. There was Black George Woodcox and his kin, the Anse clan, – Red Anse, Grey Anse and Black Anse – , Axe-Handle Jack, Choke-Bore, and High-Heeled George, to name just a few. They were an independent-minded, carefree lot, but always ready to lend a helping hand to a neighbour in trouble. Of all the roads, which were built in those early days, – the Hastings, Opeongo, Bobcaygeon and Peterson – , the Monck Road is the only road that remains today and is used for many kilometres on its original right-of-way.