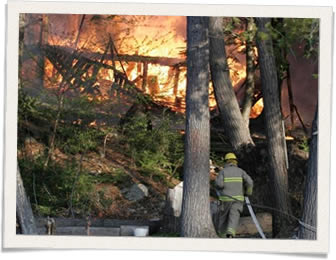 As the population of Bancroft grew, the need for a fire brigade became pressing. In 1901 the council of Faraday Township voted to raise funds for the building of a fire hall and the purchase of a steam engine, but it took several more years until the building was completed and the equipment bought. The first fire brigade was formed in 1905. Its chief was Michael Rouse. In 1930 the old fire bell was replaced by a siren. The pump equipment was replaced, and at the same time modernized, several times. In the beginning a long line of hoses had to be strung from the York River to the fire. In winter, when most of the fires occurred, this took even longer, because, first, a hole had to be chopped into the ice of the river. These delays to get the water to the fire were a major problem at that time. Over the years a number of significant fires did much damage to various buildings in Bancroft. As already mentioned, the Woollen Mills burned three times, and the grist and roller mills burned twice. The Old Queen’s Hotel and the Yellow Block downtown, the Old Community Hall and the United Church were either erased or damaged by fire. When Mullett’s hardware store burned down in 1928, exploding ammunition and high flames prevented the fire brigade from moving in to save it and the surrounding buildings. Today Bancroft has a well-organized volunteer fire brigade. Its members demonstrate the same bravery and determination as the firemen of a century ago.