The Elk Restoration Project of Bancroft, Ontario
Back in January of 2000, the first of two herds of Elk from Alberta were shipped to Bancroft scheduled to be released back into the wild, and re-populate the area. The second release was a year later in Jan 2001, when 50 more elk were released. Since that time, the once endangered elk’s population has grown and flourished. So much so, that the first elk hunt was allowed in September of 2011.  more…

Turtle Crossing
From May through Sept please take care while driving to help protect the indigenous turtle.  Turtles of all 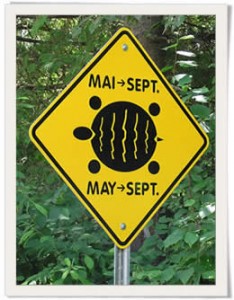 ages will wander away from their home water bodies occasionally, but mainly it is the adult females that must struggle overland in the nesting season to find a suitable warm, sunny place to bury their eggs. Roads border many of our rivers, ponds and lakes where turtles live, so vehicles take a terrible annual toll on breeding females. Since turtles need a specific combination of conditions to lay their eggs — southern exposure with its more direct sun, soft soil, the appropriate soil humidity, and little or no plant cover — they often have no choice but to go far from the water in which they live. Female turtles may have used many of these sites for generations.  more…

Newspapers
The newspapers published in Bancroft include Bancroft This Week and The Bancroft times.